For South Daytona family, their gift will soon be owning a home 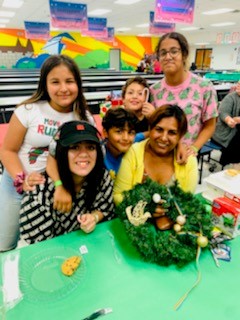 SOUTH DAYTONA — In a few months, Betsaida "Betsy" Fortier, her husband and their five children will move from the rented manufactured home where they currently live to a new home they will own. For Betsy, home ownership would likely not be possible without the Homes Bring Hope program that is working to help working families with lower incomes achieve that basic American dream.

"Just being able to have our own home, you have no idea," Betsy said when asked how much she's looking forward to home ownership. "Just for everyone to have their own space, to not be on top of each other."

For Forough Hosseini, such a response is gratifying because it's another step toward her goal of creating more home ownership for lower-income working families. Hosseini, who also is an executive vice president of information systems for ICI Homes, has long had an interest in education and breaking the cycle of poverty.

"The way to have a better neighborhood is to have home owners," Hosseini said.

To fully understand the excitement Betsy and her family feel about owning a home in a few months, it helps to know the recent tumultuous journey they've faced.

The family had moved around a bit, and came to South Daytona from New Hampshire in 2020.

Things were going well. The children were enrolled in their new schools. Husband Shawn was hoping to start his own handyman business. Betsy, who also works fulltime as a patient care technician for AdventHealth in Daytona Beach, enrolled at Daytona State College to study business administration.

In October 2020, tragedy struck. Shawn was working on a truck outside.

"It was a nice day," Betsy recalled. "The sun was shining."

One of the children said they thought their father needed a glass of water. When Betsy came outside and found him, he was turning gray and in the throes of a seizure. She immediately began giving him CPR.

"It was very traumatic," Betsy said. "I had my children staring at me, crying."

Her husband had had seizures as a baby, but hadn't suffered from them since. He was rushed to Halifax Health Medical Center, but he went into cardiac arrest and suffered a brain injury. He's now back in the family's rented manufactured home, but cannot yet see or speak, and is very sensitive to being touched.

Betsy said they are working with her husband to "retrain the brain and muscles to work together."

Betsy and her family are paying $1,200 a month — not including utilities — to rent a three-bedroom manufactured home. It's definitely not big enough to accommodate all of them.

Husband Shawn is in one bedroom, the two youngest girls are in another bedroom, and the twin boys take up the last bedroom. Oldest daughter Lyoneli sleeps on the couch in the living room. Betsy sleeps in the dining room with her mother-in-law, who is helping to care for her bed-ridden husband.

Besides being crowded, Betsy said the manufactured home isn't set up to be accessible for someone who is physically disabled like her husband.

"When we have to take him to the doctor, it's a whole circus," she said.

Despite everything, Betsy works three 12-hour shifts a week at AdventHealth in Daytona Beach. On days she works, her mother and mother-in-law help get the children home from school and then watch them. A nurse also helps care for Shawn.

"It's complex," Betsy said of the life her family now leads. "It used to be so much easier when Shawn was OK."

A new home on the horizon

Betsy said the one saving grace is that her children are well-behaved and good students in school.
"They're all good students," she said. "Very good students."

She was already familiar with Food Brings Hope because her daughter Sophia takes part in the KidsZone after-school program at South Daytona Elementary School where she's in the fourth grade Sophia loves the program because it focuses on teaching children how to read and do math via cooking.

"We bake stuff, and some days we learn about calories," Sophia said. "This week we had our Christmas party, and we got to eat our cupcakes."

Sophia also now helps cook at home. "The easiest is eggs, and then macaroni," she said. "And sometimes I help my mom make spaghetti, and it's really, really good."

"I reached out to her, and we started the process," Betsy said.

The "process" involves working through all the steps that come with proving to a lender that the family can afford a mortgage. That's a challenge for working families, Hosseini said.

"Hard-working families who don't have a lot of money don't (always) have a chance to become
homeowners," Hosseini said. She said overcoming the barriers to owning a home — confusing paperwork and finances — is critical because paying a mortgage is often less costly than renting.

The plan now is for Homes Bring Hope to build a new three-bedroom home for Betsy and her family. The home will be on one of three vacant lots Homes Bring Hope now owns on the 300 block of Caroline Street in Daytona Beach's Midtown neighborhood.

"The more homeowners we have in 32114, the better we will be as a community," Hosseini said.

FBH's programs continue to get strong support in the community. Earlier this month, the program
raised more than $200,000 at its annual gala at Daytona State College.

The Fortiers’ new home won't be large — three bedrooms, one bathroom, and a one-car garage. But it will have more space than the family's rented manufactured home, and it will include modifications that will make it possible for husband Shawn to use the new home's shower and to get in and out of the home more easily.

The home won't be finished for several months, but the children are counting the days.

"I don't really like moving, because we moved a lot," said daughter Angelina, an honor roll student at Atlantic High School who is in the digital video technology and theater programs. "It will feel great being in a new home we stay in."

Betsy is also counting the days.

"Now, we've got to wait a few months," she said. "But at least it will be accessible to my husband."

About this series: The FBH Community’s mission is to foster community organizations that proactively work to eradicate the causes of generational poverty. Programs such as Food Brings
Hope, VCan, Pierson Family Literacy, Homes Bring Hope and the FBH Prosperity Initiative help
hardworking families struggling with hunger, housing insecurity, underemployment and low levels of literacy. Overhead is covered by the Hosseini Family Foundation, so 100% of donations go directly to the programs and families. Throughout the holidays, The News-Journal is highlighting the organization by publishing the stories of some of its young participants. To donate to the organization, or to brighten the holidays by donating a gift to a child, email info@foodbringshope.org.

Pat Rice is editor of The News-Journal. He encourages all readers to support the newspaper's content gathering with a digital or print subscription. If you have a story idea you would like to share, send it to Pat at pat.rice@news-jrnl.com.

S. Daytona family's gift will soon be owning their own home